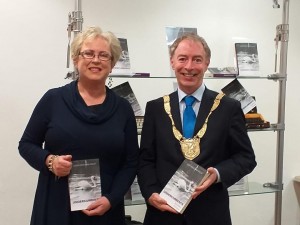 Mount Merrion resident and author Rosaleen Flanagan recently launched her second book UNDERCURRENTS in the Mount Merrion Community Centre.  Rosaleen outlines below how she came to writing and the journey to publish her books.

Originally from Tullamore, it is now 34 years since I settled in Mount Merrion. In 2008, I enrolled on the Dun Laoghaire Further Education Course in Creative Writing. It was something I had always wanted to try. I always thought I was dyslexic and this came through in my work, words with b’s instead of d’s and ‘though’ instead of ‘thought’ were all over the place. I would have to spell t-h-o-u-g-h every time to understand it needed a ‘t’ at the end of it.

The teacher, Helen Ryan, was super encouraging. And as she mentioned recently at the launch of my second book, UNDERCURRENTS, she could see that I could tell a story. In 2009, I became a carer for an elderly relative. Thankfully, it was the same year that Helen set-up her evening writing classes in the Community Centre here in Mount Merrion which I attended. After my elderly relative died in 2012, I decide to take my writing more seriously.

I found it impossible to engage with either an agent or a publisher. The response was typical of what I was told to expect – no response in 95% of cases and ‘regret’s’ in the remaining 5%. But there was a shift in the way readers were buying and reading books. Physical books versus downloads on a kindle, buying them in a store or on Amazon. In 2017, I came to realise that the only way my book would ever be published was if I was to self-publish. Then I met up with Gianni Tapinassi of Writer’s Garage and with his help, my first book, MISSING LINKS was launched in 2018.

Of course, it had to be edited, proofread and checked for accuracy with regard the Garda force. Support for that came from Helen Ryan as well as my neighbours on Wilson Road, Mary Kelly and Cathy Leonard Doyle.

To have a book on the shelves of a book store you need to be ‘accepted’ by the book distributors in the country, which is not an easy task. Self-publishers have to be flexible, they need to write, to promote their book and also be socially active on Twitter, Facebook and Instagram. But what keeps me going is that I enjoy writing.

A special two-book gift set for €20 is available  from:  Adrian Peter’s Newsagents, The Rise; McGuire’s Newsagents, Deerpark Road and Company of Books, Ranelagh.   You can contact me through my webpage www.rosaleenflanagan.com.  My telephone number: 01 288 9086 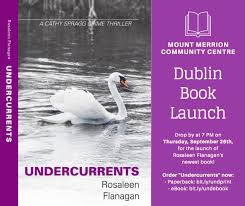