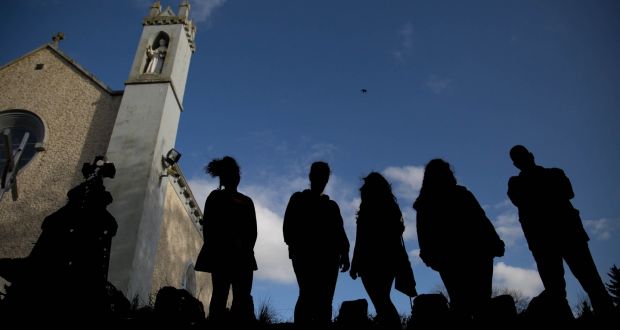 The tragic circumstances of Syria look to dominate our minds and our media over Christmas. It is fitting, then, that Fr Tony has recently made an appeal to his parishioners for help in housing a Syrian family in Mount Merrion. As he rightly asks us

You can read the letter in full here: Letter From Fr. Tony

The following piece recently appeared in the Irish Times describing the family’s story and their experiences since moving to Ireland in April. We are repeating it here as there may be some non-parishoners in the community who would also like to help this cause.

Marwan and family: arrived from Syria in April

Growing up on the outskirts of Damascus, Ghazal* rarely paid attention to the different religions around her. As a Christian, her family celebrated Christmas and Easter and invited their close Muslim friends to join them in their home on religious feast days. In return, their Muslim friends would invite the family to celebrate Eid and Ramadam. Before the civil war broke out in 2011, it didn’t matter what you believed, says the 18-year-old.

“There was no difference between us. We used to live together. We never asked, ‘What’s your religion?’ ” We only knew about religion from school. There was only one religion class and that’s how we knew they were Muslim and we were Christian.”

Ghazal’s two younger sisters nod in agreement as their father, Marwan, joins his daughters in the small living room, where we have gathered to talk about the family’s journey from Syria.

“These groups that are fighting, they are killers, they are not Muslims,” he says. “They are not our people. We were always together before; we supported each other. That’s the real Syria.”

As Syrians, Marwan says his family can empathise with those affected by last Friday’s attacks in Paris. “Every day we have explosions in my country. It’s not strange for us to see these terrorist attacks. I can understand what they’re going through. These were innocent people, exactly like us.”

Marwan’s wife, Rodina follows the conversation with her dark eyes before standing up and walking over to the window, which overlooks the bustling main street of Ballyhaunis.

“It’s difficult for her to talk about this,” says Marwan, motioning for his wife to join the conversation. She stays by the window.

Marwan and Rodina were forced to abandon their work as civil engineers in Syria when bombs began to fall near their office. His daughters stopped going to school because of the constant explosions.

Before the conflict, life in Syria was very different, says Ghazal. “We were middle class. We weren’t rich but we weren’t poor – we were comfortable. It was so safe. You’d never think: I’m going to be killed or threatened or kidnapped.”

From rumours to reality

When the violence broke out in 2011, the three sisters began hearing rumours of bombings and snipers.

“First of all you start hearing,” says Ghazal. “Then you start knowing that your friends and relatives are being killed. Then more stories, more stories and – bam – it comes to you. We really couldn’t believe what was going on.”

“Sometimes we couldn’t go to school for a week in the month. They’d try to bomb us, killing and kidnapping. We just couldn’t go; we’d stay at home.”

“Her friend in class died,” she says, pointing at her younger sister. “She just died. I mean, how? A mortar attack. Then you start to realise; you see the death.”

Marwan lets out a deep sigh as he describes how his best friend was blown up while crossing the street.

“We didn’t find any pieces of him. After 12 days we found a piece of his carnet [identification card].”

As Christians, the family knew they were targets and so they stopped going to church. They haven’t celebrated Christmas or Easter in four years. All they could do was watch helplessly as their homeland was blown to pieces.

Marwan was determined to get his family out of Syria as quickly as possible. “If you have a family you want to save them. When you see the bombs falling and the people dead in the streets . . . all you’re thinking about his how to get them away from this.”

He contacted his cousin, who had already moved to Ireland, and began arranging the necessary papers for the family to fly to Europe. In April 2015 the family arrived in Dublin.

After a month of trying to start a new life in Ireland without the support of the State, the family declared themselves asylum seekers and were sent to the Balseskin Reception Centre in Finglas. In June they were transferred to the Direct Provision centre in Ballyhaunis, Co Mayo.

They say the staff at the centre are very friendly and the girls enjoyed making friends from around the world.

“We don’t have many cultures in my country and we love the people here,” says Ghazal. “But can you imagine staying here for nine years? We only came for about four months, but it’s tough for the people who are here nine years.”

The family now have refugee status, which means they can legally live and work in Ireland. However, Marwan still cannot find a home for his family. He says every landlord he calls refuses to accept tenants on rent allowance. The sisters have started school in Ballyhaunis but will have to move once their parents find a home.

Despite the hurdles of settling into life in Ireland, Marwan is grateful to the Irish people for welcoming his family into the country.

“I will never forget this favour. I will not forget this country because they helped us; they saved us from death.”

He believes European nations must focus their energy on ending the war instead of debating how many refugees should be granted asylum.

“This is not about how many refugees you want to take. The main thing is to stop the war. Put yourself for one second in our position. We had a good life in Syria. We only left because of the war, because I wanted to save my family.

“I had my little farm, my office, my good job. I left everything over there. I left my brothers, my sisters, our family – all of them are there.”

Ghazal grabs her sister’s phone and begins scrolling through photos. “Our dog; we left our dog behind,” she says, as she hands over the phone. “He is three years old now.” On the screen is a photo of a white, fluffy bichon frise looking playfully up at the camera.

“They’re always crying about him,” says Marwan, as his teenage daughters flick through images of their beloved pet. “His name was Lucky.”