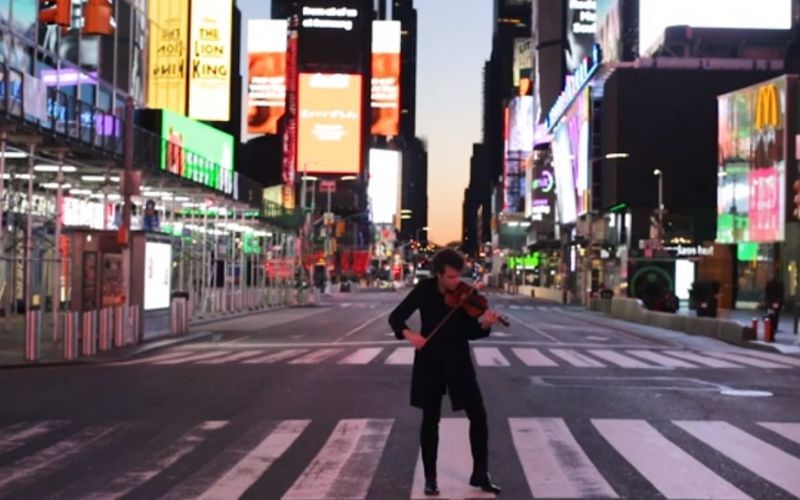 Violinist Gregory Harrington is a former resident of The Rise in Mount Merrion.

An Irish musician living in New York has produced a touching visual love letter to the silent city in the midst of the COVID-19 pandemic.

Prominent Dublin violinist Gregory Harrington set the video to “The Nearness of You” – a song off his new album “Without You” – and the powerful imagery shows the City That Never Sleeps in the middle of a giant slumber.

Harrington plays the violin in a number of iconic and completely deserted New York locations in the emotional video.

The musician is seen playing music in Washington Square Park and Times Square, and the video also includes shots of an empty Grand Central Station and a deserted DUMBO – sites that would generally be teeming with life during some fine spring weather in the Big Apple.

The video, entitled New York City During COVID, also incorporates numerous shots of shuttered New York establishments, highlighting the utter devastation that the pandemic is having on local businesses.

Harrington’s video opens with a shot of the Brooklyn Bridge and the Financial District shrouded in fog and, but for one ferry moving up the East River, everything is still as if the shot were a photograph.

The music video is an ode to New York City’s beauty and resilience and Harrington explained the meaning behind the footage.

“It is a snapshot in time of the emptiness and vulnerability of the most resilient places on Earth and a nod to the hope that lies ahead. As with many difficult times, dawn emerges from darkness. New York City, so near but yet so far… ‘The Nearness of You,” he said.

The COVID-19 pandemic has brought New York to a standstill, but nothing really captures that like a man playing the violin in the middle of 7th Avenue with no fear of being run over.