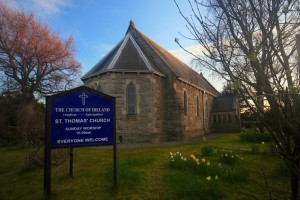 St Thomas’ Church, the “Little Church on the Corner” with its Wayside Pulpit has probably caught your eye while out and about or using the parish hall.  Celebrating its 150th anniversary in 2024, it has an interesting history.  Rector Rev. Canon Gillian V. Wharton has kindly written this article for Mount Merrion Residents Association.  Check out the beautiful stained glass windows when you are out on your next walk or dropping the kids to Scouts.

St Thomas’ Church was originally built as a chapel-of-ease in the Parish of Taney (Dundrum). The church was consecrated on 3rd December 1874. The church cost £750, which sum was raised in full by the parishioners.  It will celebrate its 150th anniversary in 2024.

Originally only an Evening service was held each Sunday but in response to local demand Morning Services commenced in 1897. In that year also a Vestry (robing room for clergy) was added at the rear of the Church, and this now forms the organ chamber.

The Buildings
The porch at the front entrance of the Church from Foster Avenue was added in 1904 in memory of the late Henry Barton. The Monk Gibbon parochial hall, which incorporates a residential apartment, was built in 1941, and named in memory of the Rev. Canon Monk Gibbon who was the Rector of Taney from 1901 to 1935.

The Rectory, which is now known as Hipwell House in memory of the Rev. Canon Trevor Hipwell, was built in 1952. In 1964 it was found necessary to enlarge the church and it was doubled in size, being dedicated on St Thomas’ Day in 1965. The church can accommodate a congregation of approximately 150. An unique arrangement of pull-out extensions at the end of some of the pews provides 24 additional seats if required. 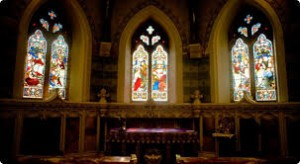 The church contains 16 beautiful stained-glass windows including one by Evie Hone, one by Alan Tomlin and one believed to be by a Flemish artist.

The War Memorial is situated on the south wall of the Church towards the front. It comprises a large brass plaque on which are inscribed the names and ranks of eighteen members of the Parish who served in the armed forces during the 1914- 1918 war, three of who made the ultimate sacrifice.  On either side are two stained glass windows erected in 1920,
one as a memorial to those who died and the other to those who served and returned safely.

Directly across from the War Memorial is a plaque on the north wall, commemorating the late Florence Balfour Olphert, who died in World War One, having contracted a fever from some of the sick and injured soldiers whilst nursing them. 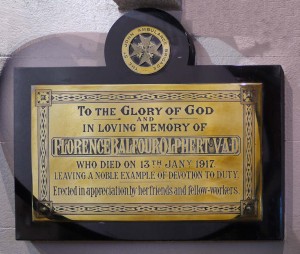 Since 1995, the two parishes have shared a rector (parish priest). The Rev. Stephen Forde was Rector from 1995 to 1999; the Rev. Arthur Barrett was Rector from 2000 to June 2004; the present Rector is Rev. Canon Gillian V. Wharton who was instituted on 27th October 2004, and was the first female rector in the Diocese of Dublin.

During the time that the Rev. Stephen Forde – who is now the Dean of Belfast – the Wayside Pulpit began. The Wayside Pulpit has meant that St Thomas’ Church has become known as The Little Church on the Corner with the Wacky Signs! It is an important part of the ministry of St Thomas’ Church and our aim is to make people think or smile when they see the sign as they go past the church in the traffic. A small committee democratically decide what goes up on the Wayside Pulpit each year.  The current one says:
Male, Female,
Gay, Straight,
Black, White…
All precious in God’s sight.

For details of services in St Thomas’ Church check the website www.mountmerrionchurch.ie